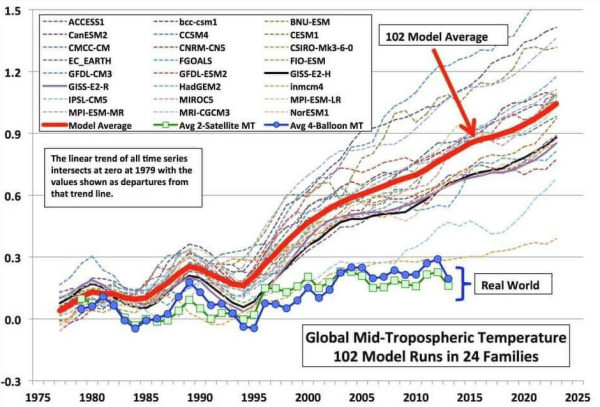 02/18/2019 09:53 - Posted by Tom van Leeuwen
Computer models are something magical. As powerful computers, located at famous universities and authoritative government agencies are involved, model output is often considered to be a substitute for reality.

A computer model is nothing more than a simulation of reality. No matter how powerful the computer, model accuracy depends on the rules that define it. If one of the model rules states "1+1=3", the model output will always be wrong, even if you run it on the fastest supercomputer available.

Climate "science" heavily depends on models. There are thousands of climate computer models trying to predict the climate for the coming decades and even centuries. All IPCC-reports are based on these models and governments implement the policy recommendations included in those IPCC-reports.
Obviously without even checking if the models are right because if they would do so, any rational person would give it a second thought.

In the above graphic, we see the global temperature forecasts of 32 different climate models used by the IPCC. The first thing that draws the attention is the huge difference between the models.

There's only one reality, so only one can be right and all the other models must be wrong!


In any normal scientific process, this would automatically disqualify any conclusion based on this data, but in climate "science", the "solution" is to use the average of the wrong models. No, I don't make this up, that's how it works and yes, they call it "science."


The thick red line in the graphic shows the average of 102 wrong models used in the IPCC reports.

The second obvious shortcoming of these models is the fact that they don't predict the real-world measurements. And they're not off by 5% or 10%... The average model predicts the global temperature anomaly over the 40-year period from 1977 to 2017 to be three times as high as the measured anomaly.

In any other scientific discipline, models with this kind of deviation would directly be discarded as worthless and useless. But in the case of climate "science", the models can't even be questioned. And if you do, you'll be called a "climate denier".


Even this abysmal, 200% deviation from reality does not stop governments from all over the world to use these models and the IPCC-recommendations based on them for their long-term energy policies, legislation and projects.

Back to the models

When model output does not match real-world measurements, one or more of the rules that define the simulation must be wrong. We should isolate the problem in order to fix it.

Luckily, among the climate models, there's one positive exception. The Russian Imncm4 model does track the real-world measurement quite well. The difference with all other climate models is that the Imncm4 model definition recognizes CO2 only as a very small factor when it comes to modeling the climate. It's the model that uses the smallest CO2-forcing of them all.

Imncm4 is the "climate denier" under the climate models. But it's the one that closest matches reality.


It seems quite obvious that CO2 is not the main climate "control knob". Models that are based on the CO2-hypothesis all predict way too much warming, while the only model that uses a small CO2-forcing matches real-world measurements much better.


I think the time has come to start an independent investigation, using traditional scientific methods, about this issue.