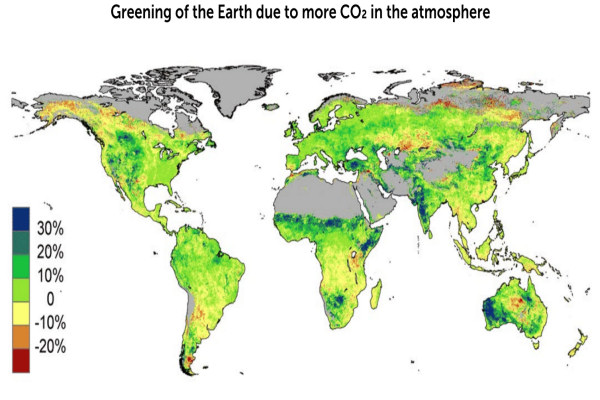 11/17/2018 10:31 - Posted by Tom van Leeuwen
The Positive Impact of Human CO2 Emissions on the Survival of Life on Earth
Patrick Moore, PhD
Co-Founder of Greenpeace

This study looks at the positive environmental effects of carbon dioxide (CO2) emissions, a topic that has been well established in the scientific literature but which is far too often ignored in the current discussions about climate change policy.

All life is carbon-based and the primary source of this carbon is the CO2 in the global atmosphere and hydrosphere.

As recently as 18,000 years ago, at the height of the most recent major glaciation, atmospheric CO2 dipped to its lowest level in recorded history at 180 ppm, low enough to stunt plant growth. This is only 30 ppm above a level that would result in the death of plants due to CO2 starvation.

It is calculated that if the decline in CO2 levels were to continue at the same rate as it has over the past 140 million years, life on Earth would begin to die as soon as two million years from now and would slowly perish almost entirely as carbon continued to be lost to the deep ocean sediments.

The combustion of fossil fuels for energy to power human civilization has reversed the downward trend in CO2 and promises to bring it back to levels that will foster a considerable increase in the growth rate and biomass of plants, including food crops and trees. 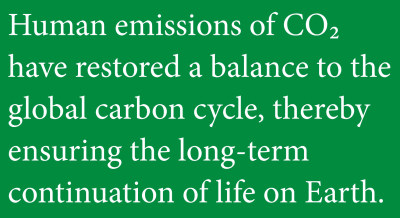 Human emissions of CO2 have restored a balance to the global carbon cycle, thereby ensuring the long-term continuation of life on Earth.

The one-sided political treatment of CO2 as a pollutant that should be radically reduced must be corrected in light of the indisputable scientific evidence that it is essential to life on Earth.

Read the complete study here: The Positive Impact of Human CO2 Emissions on the Survival of Life on Earth

This paper will change the way you understand the carbon cycles, climate change and human influences in those processes. Highly recommendable.