The logarithmic nature of the CO2 greenhouse effect

10/13/2019 09:00 - Posted by Tom van Leeuwen
For many people, a logarithmic relationship can be a fairly abstract concept. It is hard to imagine the implication that it has on the strength of the greenhouse effect that corresponds to the amount of CO2 that humanity emits into the atmosphere. Here we present a visualization to explain in a simple way what we are talking about.

CO2 is a greenhouse gas. The presence of CO2 in the atmosphere traps a part of the infrared radiation that the Earth's surface emits into space. The total greenhouse effect of the Earth's atmosphere is about 30 °C, without this effect, the temperature would be -15 °C instead of +15 °C, the actual current average temperature.
Water vapor is the most important greenhouse gas. CO2 provides 3 °C of heating, that is, 10% of the total effect.

When the concentration of CO2 increases, its greenhouse effect also increases, but not in a linear fashion, but logarithmically. For each increase in concentration, the effect on temperature is less and less.

In the main graphic of this article, generated using the radiation detection system of the United States Air Force (MODTRAN), the blue line represents the greenhouse effect of CO2. On the horizontal axis, we place the CO2 concentration and on the vertical axis the amount of energy the Earth receives per square meter of surface every second. The red lines mark the values of the beginning of the Industrial Revolution, the green lines the values for the year 2006 and the black lines the values that correspond to the doubled concentration we had at the beginning of the Industrial Revolution.
We observe that the CO2 greenhouse effect dramatically increases when the levels are low, while the increase in the effect is much lower with the current CO2 concentrations.

Given that the greenhouse effect of CO2 is only 10% of the total effect, it is clear that increasing the already existing concentration of CO2 in the atmosphere no longer has any measurable effect on the earth's temperature. This graphic is also from the US Army. 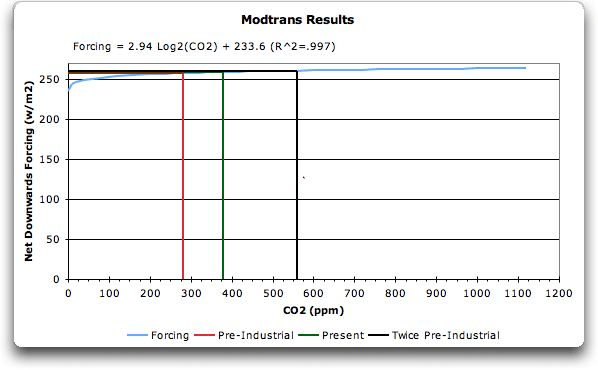 This phenomenon is known as the saturation of the CO2 greenhouse effect.

An approach to better understand the logarithmic progression of the effect: 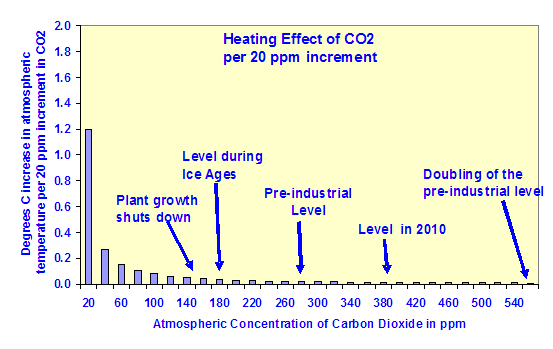 We see that a tiny concentration of only 20 parts per million (ppm) is already sufficient to activate more than a third of the CO2 greenhouse effect. Increasing the concentration with 20 ppm to 40 ppm, the effect already produces 1.5 °C of heating, that's half of the total.
140 parts of CO2 per million is the minimum concentration necessary to sustain plant life. At this level, the greenhouse effect is completed by 67%. At the end of the last glacial period, 16 thousand years ago, the CO2 concentration was 180 ppm and its greenhouse effect was already 72% saturated.
At the beginning of the Industrial Revolution (1850), the saturation of the CO2 greenhouse effect reached 80%, 2.4 °C of the possible 3 °C. This means that CO2 emissions by humans never had any measurable effect on global temperature. For example: moving from the current 420 ppm CO2 to 440 ppm would cause heating of 0.02 °C.

With this knowledge it is clear why IPCC climate models do not work.
The models exaggerate the CO2 greenhouse forcing. They are programmed like this. From there, all positive feedback effects, such as the increase in the greenhouse effect of water vapor, fail.
The result is that the models forecast too much warming for the future.

If we could only get these images and this message to the responsible politicians, they would easily see that there is no rational reason to try to limit CO2 emissions.

Article based on this article from Wattsupwiththat.com , the most visited climate website. I have corrected the heating °C of the third graph with the values calculated from the first graph. The heating of the first section is less than the 1.7 ° C value shown in the original graph. The other values have been changed accordingly.