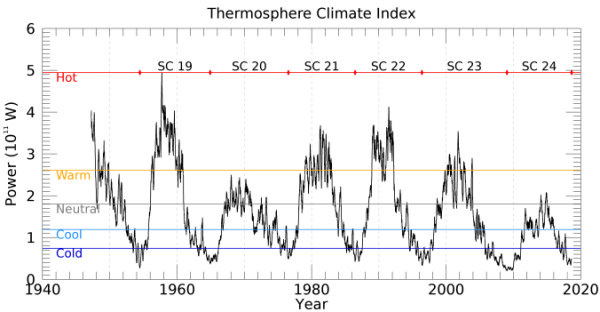 Data from NASA’s TIMED satellite show that the thermosphere (the uppermost layer of air around our planet) is cooling and shrinking, literally decreasing the radius of the atmosphere.

NASA launched the Thermosphere-Ionosphere-Mesosphere Energetics and Dynamics (TIMED) mission in 2001 to get a better picture of this outer layer. The energy that comes into it from the sun is absorbed by air molecules and reradiated to space during the normal ups and downs in solar energy that occur over a roughly 11-year time span.


The exact temperature of the thermosphere can vary substantially, but the average temperature above 180 miles (300 km) is about 800 degrees Fahrenheit (427 degrees Celsius) at solar minimum and 1,700 degrees Fahrenheit (927 degrees Celsius) at solar maximum. Though these temperatures sound hot, you would not actually feel warm in the thermosphere, because the molecules in that layer are too far apart.

"This same cooling effect is expected to happen (somewhat counterintuitively) as carbon dioxide concentrations increase from emissions at Earth's surface, so understanding the natural variability of this layer is important to detect any changes from carbon dioxide increases."