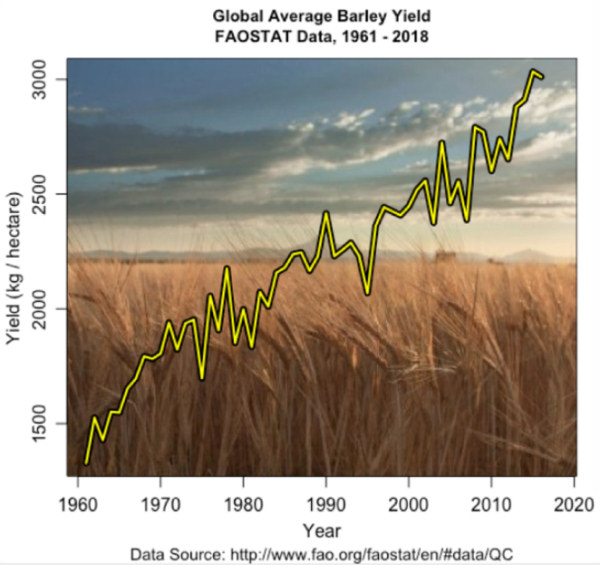 11/20/2018 19:05 - Posted by Tom van Leeuwen
Last month, researchers from the University of East Anglia (the university that brought us Climategate) published this study, assessing the impact of drought and heat extremes caused by Climate Change on barley yields.

"Average yield losses range from 3% to 17% depending on the severity of the conditions. Decreases in the global supply of barley lead to proportionally larger decreases in barley used to make beer and ultimately result in dramatic regional decreases in beer consumption (for example, -32% in Argentina) and increases in beer prices (for example, +193% in Ireland). Although not the most concerning impact of future climate change, climate-related weather extremes may threaten the availability and economic accessibility of beer."


The truth is quite different. As we see in the figure above this article, barley yields have doubled over the last 60 years from 1,500 kg per hectare in 1960 to over 3,000 kg per hectare in 2017.
As was to be expected, the yield growth seems to be in perfect correlation with the increase of CO2 concentrations, an essential gas for life on this planet.

The year the Maldives drowned
NASA: Lack of sunspots to bring record cold