10/14/2019 22:23 - Posted by Tom van Leeuwen
Professor at the Geophysical Sciences department at the University of Chicago David Archer describes the band-saturation of the CO2 greenhouse effect.

After that, everything goes wrong.

The first part of the lecture is very informative. Professor Archer explains in great detail how the CO2 greenhouse absorption works, it's logarithmic nature and the band-saturation. He even shows on a working instance of the MODTRAN model how adding the first ppm of CO2 to the atmosphere has a huge impact on the atmosphere's energy balance. Adding more CO2, the effect fades away.

Perfect! This explains why the IPCC models do not work. It's because adding more CO2 has no measurable effect on the temperature. It also explains why there is no observed correlation between CO2-concentration and global temperatures in the real world. In fact, his explanation up to this point solves the whole "Global Warming" controversy. There is almost no human-caused global warming. Period.

The CO2 band-saturation effect defuses the whole Climate Change scare. That's why so few people talk about it.

Unfortunately, things start to take a different course after 09:35 minutes into the lecture when Professor Archer starts talking about a supposed Doppler effect between the radiation and a moving receiving CO2 molecule.
The point he tries to make is that the CO2 molecule can absorb photons with a frequency slightly different because of the Doppler effect. What he does not take into account is the huge difference in speeds between these two types of objects. A convecting CO2 molecule might be moving at a speed of 300 to 400 km/hour at most, while the photon moves at the speed of light, 299,702 km/second in the Earth's atmosphere. So:
If the direction of the two objects is the same, the CO2 molecule perceives the photon's frequency as 1.00000037 times its real frequency. If both objects move in the opposite direction the perceived frequency is 0,99999963 times the real frequency. If the photon comes from any other direction the perceived frequency is in between these two values. So, the difference in perceived frequency between a steady molecule and a convecting molecule is neglectable.
As the photon is absorbed even if "the frequency, the vibration of the gas is sort of the same as the frequency of the light that's coming in (07:40)", the Doppler effect does not affect at all on the absorption frequency band. Professor Archer should know this, and I'm sure he does.


Edit 10/17/2019
A reader wrote me that there exists a Doppler-effect between the photon frequency and the "spinning" and "vibrating" movements of the CO2 molecule. That makes sense, but that's not what Professor Archer is telling us.

Somehow, this absurd assertion marks a sudden rupture in his lecture, because shortly after, Professor Archer pronounces the most conflictive statement (10:20):

"It turns out that even if the gas absorbed everything, adding more of the greenhouse gas would still affect the climate."

This, of course, is impossible. If the gas absorbs everything, then there's nothing left to be absorbed and adding more gas will not affect the climate.

He tries to explain his statement comparing the greenhouse effect with a layer model in which panes of completely saturated glass are stacked one on another, but he admits that they can not explain how this works on Venus. That's not a great start for his model. 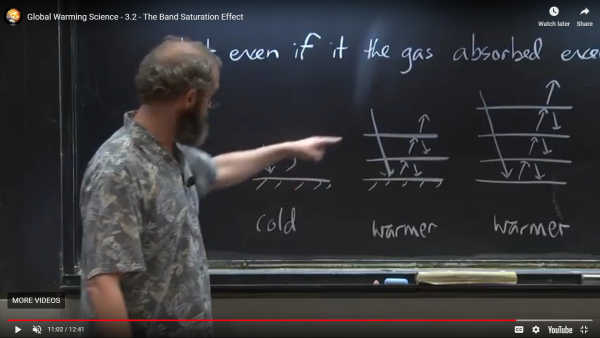 The truth is that you can only stack a finite number of saturated glass panes. You can't go on and on and on as he describes it because this modeled analogy only works up to the top of the atmosphere. But this is just a minor flaw because the photon won't make it past the first pane anyway.

During the whole explanation of his model, Professor Archer seems much less confident than during the rest of the lecture. He hesitates, searching for words and at 10:52 minutes the video is edited. Even the written text on the blackboard is edited (chalk dust below "the") and still contains an error: "but even if it (sic) the gas absorbed everything," All this indicates confusion and doubt at the moment he prepared this section of the presentation.

He closes this part with the phrase: "that's how we defined it, to make it simple". This can be interpreted as a reference to the climate science doctrine. They define that CO2 is the climate control knob and start building their hypothesis from that definition on.

After that, he quickly returns to the first part of the lecture saying: "so, the band-saturation effect is a very, very important effect for understanding how the climate of the Earth responds to greenhouse gasses like CO2", completely contradicting the points he said just seconds before.

His closing phrase emphasizes his fixed "CO2-equals-warming-by-definition" mindset: "It's a good thing we already had CO2 in the atmosphere before the Industrial Revolution because if there wasn't and we started putting CO2 into a virgin atmosphere, it would have just totally melted down the climate".

No, Professor Archer! If we would have started adding CO2 into a virgin atmosphere we would actually have a lower concentration than the 420 ppm of CO2 we have right now, and the temperature might be slightly lower depending on the degree of saturation of the CO2 greenhouse effect. But in no case, the temperature would be higher.

A better final phrase would have been: "It's a good thing we already had CO2 in the atmosphere because with a virgin atmosphere life on earth would not have developed, and therefore, the Industrial Revolution would never have happened."

During the first 9 minutes of this lecture, Professor Archer presents a solid explanation of the CO2 greenhouse effect, its logarithmic progression, and its band saturation effect. Unfortunately, in the last part of his lecture, he spoils it all contradicting his own explanation with a failing analogy, an impossible statement, an ill-constructed model, and a bogus conclusion remark.