"In the past, the vast majority of the world population lived in conditions of extreme poverty. The percentage of the global population living in absolute poverty fell from over 80% in 1800 to 20% by 2015. According to United Nations estimates, in 2015 roughly 734 million people or 10% remained under those conditions."

Well, we're doing great! Humanity is doing great! This has been the best decade so far in human history!
According to the World Bank, this decade created more than 25% of all the wealth ever created in human history. That might be a very abstract statement, but that means that although the world's population grew to over 7 billion people, enough wealth was created to drop the number of individuals living in extreme poverty by half. 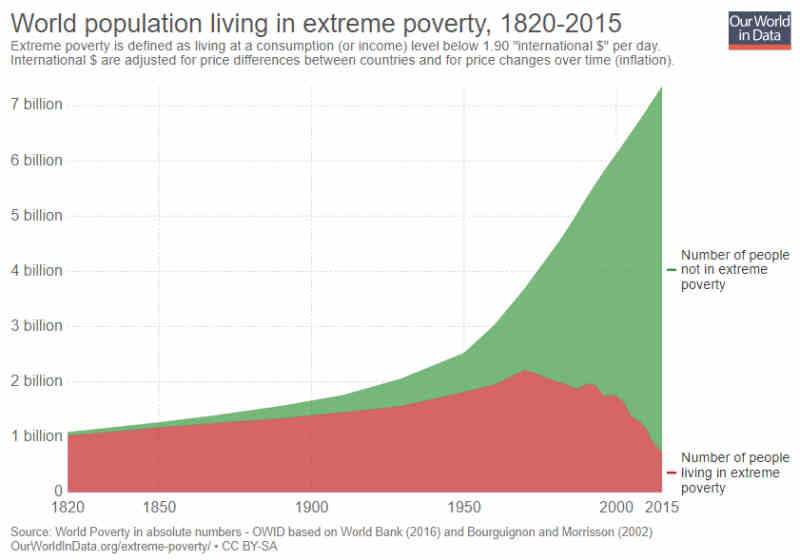 Meanwhile, child mortality has been reduced to a third and worldwide life expectancy is up from 69.5 to 72.6 years. Now, that's what I call progress!

All these feats, all this progress, these incredible advances in well-being, wealth and improved living conditions has been possible thanks to the availability of cheap and reliable energy sources. This simply could not have been possible depending only on wind, solar or other sources of intermittent, renewable energy.

Humankind has been blessed with abundant deposits of energy-rich resources that have been built up over hundreds of millions of years, waiting for us to give ourselves this enormous push into prosperity and well-being.

Unfortunately, not everybody understands it this way. Some feel guilty about their own prosperity and want other people to feel the same. They even prefer to undo all the progress in order to ease their guilty feelings even if that would push billions of people back into poverty.
And worse of all, they base their beliefs on unproven hypotheses and models while they ignore real-world data. They prefer dogmas (called "settled science") before open discussion. They rely on propaganda instead of scientific arguments.

That is a regressive way of thinking.

We're about to finish the best decade yet in human history. Unfortunately, some forces desperately try to push us back into misery and poverty.


From now on, try to trust real-world, measured data instead of computer models. Try to rely on your own investigations instead of propaganda. Try to ignore the politicians and the so-called scientists that "adjust" their findings according to the needs of their employers. Try to trust yourself!

We are all unique, independent individuals, voluntarily cooperating with each other. Don't let them intimidate you into collectivism and groupthink.

This week, the capital of Spain, Madrid, will receive a lot of worldwide attention because of the 25th meeting of the Conference of the Parties to the UN Framework Convention on Climate Change (UNFCCC). 20 Thousand bureaucrats fly to the city to assist the conference.
There will be very little attention to the question whether there is a problem or not while there will be a lot of attention to the question what to do about this supposed problem.

Without any doubt, all fingers will point toward the human influence on the climate, and up to some extent, they will be right! But for the wrong reasons.
Read more...

According to the IPCC CO2-hypothesis, rising CO2-levels leads to warming. That warming supposedly expands sea-water and melts glaciers and polar ice sheets, finally resulting in rising sea-levels. They warn us for catastrophic sea-level rises in the year 2100 and beyond because of this process.